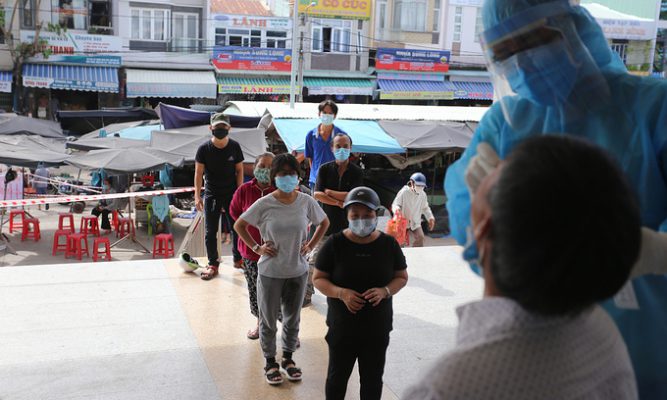 The Ministry of Health announced two more people have been diagnosed with Covid-19, both linked to current hotspots.

Patient number 963 is a 30-year-old man in the northern province of Hai Duong.

On August 3 he ate dinner at a local restaurant where four employees were later diagnosed with Covid-19.

His samples were collected following contact tracing, and the infection was confirmed on Sunday.

“Patient 964” is a 49-year-old woman in Quang Nam Province, next door to epicenter Da Nang, who attended a wedding in the city on July 11 at a restaurant that was later linked to a number of Covid-19 cases.

She too tested positive on Sunday.

The National Institute of Hygiene and Epidemiology said the virus that caused the first locally transmitted case in Hai Duong recently was the same strain as the one in Da Nang.

In late July the health ministry had said the virus causing the resurgence in local transmissions in Da Nang was a new, more contagious strain of foreign origin.

Experts have yet to find out if it is more virulent than the previous strains.

Doctors had also said Da Nang was not the source of the Hai Duong outbreak.

The two new cases took Vietnam’s Covid-19 tally to 964, including 484 active cases. There have been 24 deaths.

Since July 25, when local transmission returned after three months, 488 cases have been reported in 15 cities and provinces, including Hanoi and HCMC.

Most have been linked to the outbreak in Da Nang, where 344 people have contracted the disease.

More than 107,000 people who had returned from abroad or come into close contact with infected people are in quarantine.