According to the content of the Press Release that Vietnam Envroy Joint Stock Company sent to the press, the media stated: CLODEWASH card product at this time is used with the official name is “Japanese technology multifunctional deodorant card CLODEWASH”, made in Vietnam by technology transferred from Japan, with the function of cleaning air smell. The main component of Japanese technology multifunctional deodorant card CLODEWASH is Chlorine Dioxide (ClO2), a compound that has been tested by WHO, FDA, EPA and Japan Center for Environmental Science Research, proving to be safe and effective, kill bacteria and some viruses like FC virus, influenza A virus, … in the air. 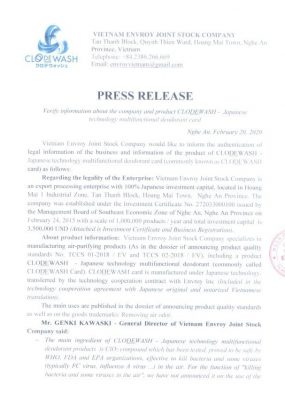 The company also has written notice to customers asking individuals and units that are selling this product to explain clearly to consumers about the use.

If there are advertisements, false or misleading information about the ability to kill Covid-19 virus, all content posted or cited must be removed.

Envroy Vietnam is a manufacturing enterprise that has a 100% Japanese investment, established in 2015 in Hoang Mai Industrial Zone, Dong Nam Economic Zone of Nghe An as an independent legal entity. Based on the research and accumulated experience from Japan, Envroy Vietnam is producing chlorine dioxide products that have been studied and used for many years in Japan. 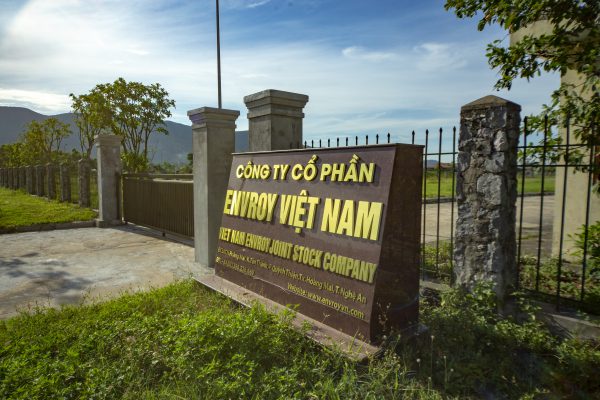 Chlorine dioxide products have the superior effect and safety to previous deodorant and antimicrobial products, and Japan focuses on measures to combat viral infections such as influenza, norovirus, red eyes …

Based on the new concept of antimicrobial products in space using chlorine dioxide, we bring a healthy and safe life for everyone.