“Knowing how to store food is important to prevent family food poisoning,” said  Professor Tom Humphrey of the Institute of Infections and Global Health at the University of Liverpool (UK). Below are the potential hazards of refrigerators and how to handle them:

1. Bacteria can survive at low temperatures

Many people mistakenly believe that cold food kills bacteria. According to Professor Humphrey, frozen foods slow down the growth of bacteria so we can store them for a few days instead of just a few hours at room temperature. However, some bacteria do not stop growing in the refrigerator, so they can be a source  of food poisoning.  For example,  listeria  (which causes cold-like symptoms, more severe than septicemia or meningitis) can grow between -1 ° C and 4 ° C and usually persist in foods. soft cheese, meat, fish … 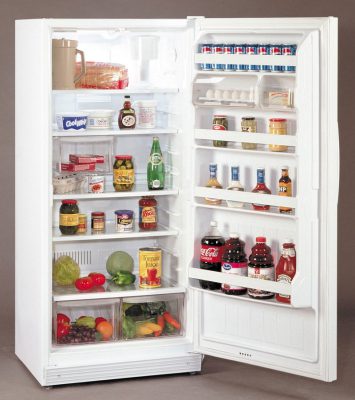 2. The risk of a fridge full of food

To ensure the health of users, food manufacturers tend to cut down on preservatives, increasing the need to store food in the refrigerator after opening the packaging.

If your fridge is full of food, set the temperature low and  clean it regularly . Professor Humphrey recommends cleaning the cabinet once a week with hot water and disinfectant, but the raw meat compartment should be cleaned a few days apart.

“One of the main causes of food poisoning is cross contamination”  – Professor Humphrey explained. Raw chicken, for example, is often infested  with the  dangerous campylobacter bacteria , which often causes symptoms like stomach upset, fever, and diarrhea. Therefore, if placed on the vegetable drawer, water in the meat will leak through the crevices, seep into the vegetables and poison you if you eat it raw. The best advice would be to place the chicken in a sealed container and keep it in the bottom compartment of the refrigerator. You can also separate raw foods from cooked, cooked foods or raw meat or fish.

According to Professor Humphrey, you should store cheese in a separate box and not put together with other foods such as pâté, fish, and bacon. The reason is that cheeses can easily get listeria from other foods through your hands.

5. Be careful with raw vegetables

“We often ignore the role of vegetables in the transmission of pathogenic bacteria”  – Professor Humphrey said. E. Coli bacteria are  usually present in a cold, frozen form and are commonly found in vegetable soil. This type of bacteria can cross from vegetables to other foods in the refrigerator, so be sure to  wash them thoroughly  before placing them in a separate storage compartment in the refrigerator.

6. Rice stored in the refrigerator is also not safe

Bacillus cereus  – bacteria commonly found in terrestrial plants such as rice, grains and spices, can cause symptoms like nausea, vomiting and diarrhea. During cooking, this bacteria is inactive, but when the rice cools, it begins to produce toxic spores. According to Professor Humphrey, you should put the rice in the fridge when it has just cooled, and should put the rice after 3 days in the refrigerator.

7. Put the eggs on the wings

Eggs should be refrigerated and kept in a middle shelf where the temperature is 0.6-2.2 degrees C so that the bacteria in the eggshell will not have a chance to penetrate in and cause cancer and spoilage, it is best to keep the eggs in dedicated cardboard boxes and store them in the upper compartments.

8. Use plastic bottles to filter water in the refrigerator

This is a very harmful habit because when at low temperature, plastic will release  toxin dioxin.

This substance is extremely toxic and is the main cause of  cancer , especially breast cancer. Not only that, the plastic composition also contains substances such as bisphenol A (BPA), Phthalates …

These substances are very harmful to humans, especially pregnant women and children.

Refrigerator temperature can impair the flavor and quality of potatoes.

Instead of storing in the refrigerator, it should only be stored in paper bags and kept at room temperature, do not put in plastic bags because moisture will accelerate the rotting process of potatoes.

Most potatoes can be kept in paper bags for up to 3 weeks.

The solution to this problem is to use the CLODEWASH Japanese technology multi-function deodorizer box in your refrigerator, you can place it in the top drawer of the refrigerator.

Our Japanese technology multifunctional deodorant box CLODEWASH is based on ClO2 gas production mechanism and uses this ClO2 gas to conduct odor removal, bactericidal, and air purification, no other odors remain. 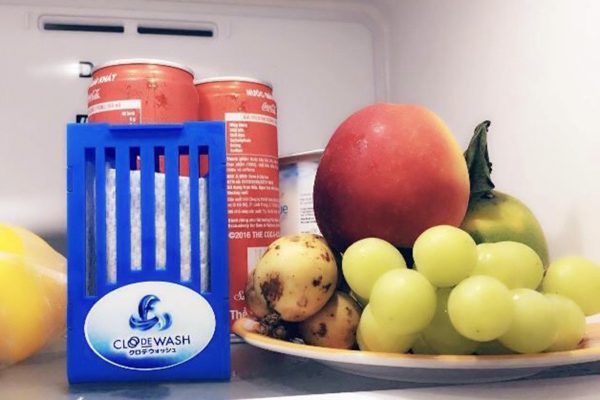 Unlike scented products on the market today, Japanese technology multifunctional deodorant box CLODEWASH absolutely does not use other scents to change the unpleasant odor.