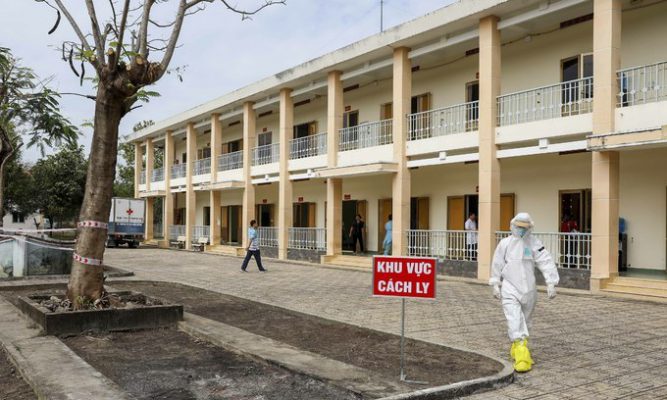 At least 71 people from various Covid-19 quarantine facilities have been transferred to the Hanoi Mental Hospital over the past eight months.

The hospital’s Doctor Nguyen Duc Vuong said the patients could be broadly divided into two groups. The first comprised those showing symptoms of insomnia and maundering after being taken to centralized quarantine facilities. The second group had a history of mental illness that had stabilized after treatment to the extent of their being able to go abroad for work and study. After returning from foreign countries, their mental issues had resurfaced due to improper treatment while being quarantined.

Since last March, many Vietnamese stranded abroad have been repatriated after countries imposed travel restrictions and closed borders to curb the spread of the pandemic that has affected more than 200 nations.

Vuong cited the case of Duy*, who’d been in Japan as a guest worker for nearly a year when the Covid-19 crisis struck.

He had quit his old job because he was not earning enough to meet living expenses, which were high. But he couldn’t find another job. Last April, Duy returned to Vietnam on a repatriation flight and was sent to a centralized isolation facility upon arrival.

After a few days in the facility, Duy began to suffer from lack of sleep. He would ramble and walk around like a lost soul day and night. He was then transferred to a quarantine facility exclusively for people with signs of mental disturbance at the Hanoi Mental Hospital.

Dr. Vuong said Duy showed signs of mental illness, but it would not be accurate to diagnose either schizophrenia or depression. The doctor attributed the mental disturbance to the changed living environment and economic pressures.

Doctor Vu Kim Hoan from the Cu Chi Field Hospital in HCMC said a man called Hieu had been sent to a centralized quarantine facility based on epidemiological factors, but during his 14-day quarantine, he showed signs of delirium and thought someone was trying to hurt him.

He was transferred to Cu Chi hospital for treating his mental issues though he was not infected with the novel coronavirus.

Doctor Hoan said that Hieu, who had a history of mental disorder before having to enter mandatory quarantine, could not adapt to related anxiety and stress, leading to paranoia.

“The Covid-19 pandemic can be a catalyst that speeds up the deterioration of mental illness, making the condition more serious,” Hoan said.

The Covid-19 pandemic and the resulting economic recession has negatively affected many people’s mental health and created new barriers for people already suffering from mental illness and substance use disorders, experts say.

A July survey by the Kaiser Family Foundation showed 53 percent of adults in the U.S., the world’s biggest Covid-19 hotspot, reported that their mental health had been negatively impacted due to worry and stress over the pandemic.

The World Health Organization (WHO) has recorded 60 percent of people experiencing mental disorders during the Covid-19 crisis in Iran and nearly half of Canada’s healthcare workers needing psychological assistance.

An August report from the Oxford Covid-19 Evidence Service Team Center for Evidence-Based Medicine at the Nuffield Department of Primary Care Health Sciences said public health measures associated with Covid-19, including quarantine of suspected cases and lockdowns, may negatively affect the mental health status of people with severe mental illnesses.

“Psychiatric disorders are long-term medical conditions, with only a few acute cases breaking out suddenly. So it is difficult to confirm that the mental problems of the above-mentioned patients were caused by Covid-19 or that the pandemic is definitely the catalyst,” said Dr. Hoan.

However, Hoan felt that bankruptcy, unemployment, income reduction and mandatory quarantining due to the Covid-19 crisis could lead to an increase in the number of mentally ill patients in the coming time.

Within the first six months, the southern metropolis saw over 327,000 people lose their jobs, and this is set to happen to another 180,000 employees of 5,000 businesses by the end of the year.

If the Covid-19 crisis persists, people with a history of mental issues or those undergoing psychiatric treatment should stock appropriate drugs for one to three months, Dr. Vuong said. Patients should not stop taking drugs for treatment of chronic mental illnesses. If a scheduled follow-up visit is delayed due to the pandemic, the patient should ensure timely remote consultation with a medical expert, he added.

People with frequent insomnia for two weeks or more with sleeping pills proving ineffective, and have found sleeping pills ineffective; as well as those with signs of depression and anxiety should visit doctors for early examination and treatment, he said.

Doctors in Hanoi and HCMC said that Duy and Hieu have been treated successfully and they are in stable health now.